Posted at 11:10h in 8. Sustainable construction by admin

The implementation of a regulatory framework regulates the constructive quality of the buildings, in relation to their exterior insulation, requires greater thermal and acoustic insulation, as well as greater protection from humidity and fire.

This type of construction system provides comprehensive insulation of the entire building envelope, completely breaking the thermal bridges that could be generated therein.

Requirements in terms of comfort and energy savings levels is ever-increasing, both in civil and residential construction.

These questions, which have been raised from the Technical Building Code (CTE), are addressed by the increasingly higher demand for and use of this construction system, as:

The supports must have a flat surface (concrete or mortar of plaster), and adequate strength to support heavy coatings.

In the case of having a mortar of plastering or concrete, check the cleanliness and consistency of the surface.

The supports must be absorbent, consistent and free of dust or release agents.

The supports must be checked, areas that do not have good conditions must be removed and repaired later.

All remaining dirt and contamination on the surface, such as accumulation of dirt or proliferation of microorganisms (fungi or mold), must also be eliminated by applying a disinfecting agent (bleach) and subsequent washing with clean water. pressure (which will be necessary to ensure the removal of dirt and cleaning agent residues).

Deteriorated concrete supports should be repaired with a repair mortar (GECOL Reparatec R2 or GECOL Reparatec R4, depending on the thickness and degree of repair), including the treatment of the reinforcement, if necessary, with the anti-rust primer GECOL Pasivador.

The GECOL TERM (SATE / ETICS) CERAMIC system must be limited in all its lower contour by a profile GECOL Perfil de arranque. Starting profile of thickness suitable for insulating plates.

This profile fulfills a double function, on the one hand it serves as reference level for the start of the assembly of the system (guaranteeing its horizontality and the support of the first row of plates) and on the other, it serves as a lower protection against penetration of moisture and external agents.

The starting profile should be positioned at least 15 – 20 cm from the ground, so that the insulation system does not come into direct contact with the surface.

This profile should be placed in a horizontal position, using for fixing and leveling GECOL Kit Conectores + Niveladores + Tornillos (Connectors + Levelers + Screws), with a fixing distance between them less than 30 cm, and placing a fixation less than 5 cm at the ends. In the joints between profiles there must be a space of 2 – 3 mm to allow its expansion.

The area where the boot profile will be placed must be perfectly regularized and waterproofed with GECOL Imper-F orGECOL Imper-G, thus avoiding the penetration of moisture by capillary ascent, throughout the construction system.

– Assembly of the insulating plates:

The insulating plates must be mounted from the bottom up, supporting each row of plates on the previous one, except the first one that rests on the starting profile.

They will be adhered to the support with the adhesive mortar of high deformability GECOL Term applied on the back of the plates:

Extend and comb with a notched trowel the adhesive on the insulating panel. With this type of application, a homogeneous distribution of the adhesive is obtained throughout the plate.

Remove the strip closest to the perimeter of the plate (approximately 2 cm) and perform the technique of double gluing in case of irregular supports.

Check always the perfect solidification of the insulating plates, as well as the adhesive wetting.

The plates are placed from bottom to top, alternating their vertical joints.

The adjustment of the plates is achieved by pressing with a board or a square; With the rule, the planimetry of the same is continuously controlled.

The plates in the corners of holes must be placed in such a way as to avoid aligning the edges of the plate with the horizontal or vertical plane of the hole, making the edges by placing a plate cut in the shape of “L” wrapping the whole song.

This detail will help reduce the tendency to crack formation in this singular point.

After the setting time of the adhesive, the protruding parts are cut and sanded.

Important note: the placement of insulating plates is one of the most important aspects, especially keeping in mind the planimetry of these, since otherwise the results will be global defects of planimetry in the facade, which will cause difficulties in the application of the ceramic coating.

Mechanically anchor with GECOL Taco de anclaje plus / A, at a rate of 8 units per m2 being increased depending on the elevation and exposure to wind, especially on the edge of the building.

The anchor pins must be suitable for the type of support and the thickness of the insulating material.

The circular head of the pins should be pressed so that it is flush with the surface of the insulating plate, so as not to have protrusions in the plane of the plate.

The small cavities resulting from the slits, should be subsequently filled with regularization mortar GECOL Term, in an operation prior to the coating of the plates.

– Reinforcement of jambs, lintels and corners of holes:

The thermal insulation system should wrap the jambs and lintels of windows and doors to minimize thermal bridges.

The top of the system with the frame will be made with GECOL Elastic-MS, when the ceramic coating is placed.

Before applying the first coat of mortar, the corner corners should be reinforced using strips of 45º mesh of about 20 x 40 cm placed on the insulating plates using the GECOL Term adhesive mortar.

Place GECOL Malla – 160 in such a way that it is completely embedded and rough textured with the adhesive mortar GECOL Term.

In the meetings, the mesh should be overlapped by 10 cm, avoiding everything

Add a second coat to a notched trowel (nº 8 – 10), when the first layer is hardened and after the application of all the reinforcement profiles in corners, as well as in all the construction elements.

parameters that in the first operation.

Anchor with GECOL Taco de anclaje plus / A; at a rate of 1 spike / m2 and penetrating

recommends not to allow hardening of the mortar for the appearance of possible cracks in the operation).

Cover the mesh and the spikes placed leaving a suitable surface, rough and flat,

to receive the ceramic tile.

For the application of the ceramic coating, the support surface must have passed a minimum of 7 days from its application, having to be consistent, flat and dry.

The GECOL TERM (SATE / ETICS) CERAMIC System is valid for the placement of ceramics not exceeding 2400 cm2 and less than 25 kg / m2.

It is also valid for the installation of thin / slim (3 mm) ceramic coverings with a maximum surface area of ​​10,000 cm2.

The adhesives to be used are:

It is recommended in all cases a perfect solidification of the ceramic piece, until the

disappearance of the grooves of the notched trowel.

If “run-off” occurs after some time (2 – 3 weeks) due to carbonations, they should be cleaned with GECOL Desincrustante (in a dilution of 1: 6) and rinsing the facade with abundant water. It will be left to dry completely, and subsequently GECOL Hidrófugo will be applied in all the joints of the façade.

Provide elastic partition joints along the façade, which configure panels no more than 4 meters horizontally and 3 meters vertically, filling them with a waterproof elastic sealant GECOL Elastic-MS. 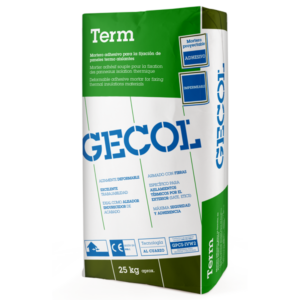 Warnings: The data provided by this Constructive Solution were prepared based on standard onsite installation processes. However, we recommend that you consult our Technical Department in the event of any specific circumstance info@gecol.com